Just Cause 2 is a romp through the fictional Southeast Asian island of Panau and achieves something very special, and very rare: it is, in some sense of the word, pure. It is untainted by typical current generation video game conventions – mostly. The game features a slapdash story, and an array of familiar gameplay mechanics, true. However, the purity in Just Cause 2 lies with the fact that when one casts aside the trappings of the game’s single player storyline and just experiences the playground, the 1,000 square kilometer sandbox that is Panau, that experience is bliss. In many ways, Just Cause 2’s greatest weakness is in its structured side, but the game offers up so much more that it’s a flaw worth overlooking. As Kane says in the game’s opening sequence, “kick back and enjoy the ride.”
Publisher: Square Enix
Developer: Avalanche Studios
Rating: M for Mature
Released: March 23rd, 2010
Type: Third Person Shooter / Action
Version Reviewed: PC
Platforms: PC, Xbox 360, PS3

Oddly enough, it is this single player only title’s storyline and plot progression, its very structure, that seems tacked on. At its core, this is purely a chaotic sandbox game. Players can choose to trudge through a paper thin plot, begrudgingly advancing through missions, or you could do whatever the hell you please. The point here is that the story missions aren’t a pre-requisite to getting to the fun part of the game.

The story follows Rico as he works undercover on the island of Panau, uncovering a series of twists which become exceedingly more absurd, each threatening to trump the last in sheer absurdity, not unlike a bad action movie, or a good one depending on your point of view. Causing chaos is the key to unlocking faction missions, and eventually the main agency missions, and there is a lot of chaos to cause. Going from the beginning of the story to the end is a bit of a repetitive grind in this sense. Do faction missions, cause chaos, unlock agency mission, repeat until the endgame.

There are two bright sides here. As weak as the story is, it provides context for your actions, making each act of mayhem just a little more interesting, and it exposes some of the inner workings of the island. The main faction and agency missions are also littered with potentially fun experiences, but if you’re goal is to just “beat the game” then it may very well tarnish that fun.

The music of Just Cause 2 is essentially ear candy. While no tracks stand out as particularly memorable, the music as a whole is very reminiscent of that found in a good spy flick combined with the music of old arcade games. It’s fresh and original.

Similar praise cannot really be given to the rest of the game’s sounds. The sound effects are not particularly remarkable, which is neither a good nor a bad thing. The voice acting can range from outright terrible, to campy in its cheesiness. You really have to be a fan of the style to appreciate it; otherwise it will just come off as mediocre over-acting across the board. You’re going to hear the words ‘comrade,’ ‘serdadu,’ and ‘lah,’ so much that it becomes nauseating. Also, the audio has a tendency to become wildly out of sync with what is being displayed on screen, which can be irritating and comical at the same time.

Contrarily, it’s very difficult to find any flaws with the game’s aesthetics. Panau may not be as bizarre and fantastic of a setting as Bioshock’s ‘Rapture’ or Dante’s Inferno’s rendition of ‘Hell,’ but Panau can hold its own against such titans. With its lush, gorgeous, tropical jungles, barren, snowy, mountainous regions, and boasting 1,000 square kilometers of playable terrain ripe for mayhem, Panau is a colossally enjoyable setting brimming with potential.

Along with its many broad environments, Panau is also host to more specific locals, such as the Mile High Club, a glorified strip club in the sky, hoisted in the air by a blimp.

Beyond just the island itself, Just Cause 2 offers players a broad range of graphical bells and whistles, fantastic weather effects, a fluid night and day system (the sun rises provide a beautiful backdrop for havoc), a gorgeous ocean, some of the best looking explosions out there, and a view distance that is seriously breath taking. Just Cause 2’s style isn’t rooted in complete photorealism, but it is still an incredibly polished visual experience. 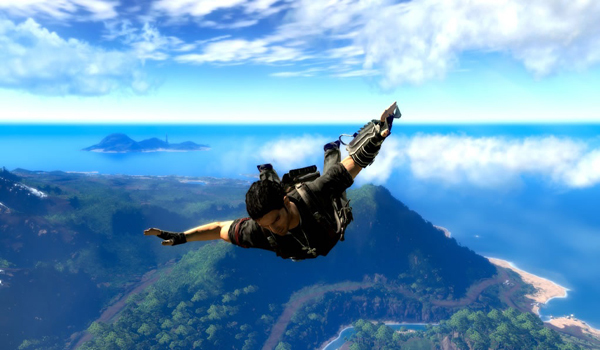 If, however, the visual style of the game doesn’t appeal to you, then the size of Panau can really work against it. The island is massive, and you may just have to get used to the scenery, because traveling can take time. Even in some of the quicker planes, getting from point A to point B can take a while, even more so if you’re traveling by way of car or bike. There is an extraction system in place for fast travel, but this feature requires you to know the general area of where you wish to go, and it requires an already discovered port in order to travel there. Additionally, extraction can only be used when you don’t have any heat on you, in other words, you can’t alert the government soldiers to your presence prior to an extraction.

Flying a plane can be tough at first, particularly on a keyboard, but it is a markedly fun experience in its own right. If you have a controller, you may want to leave it by your side when you have to fly a plane.

The controls work well for the most part. Aside from flying, the controls are pretty intuitive and don’t require too steep of a learning curve. Once you get the hang of everything, the sky’s the limit for what you can do. As with any good sandbox game, experimenting is half the fun. Discovering what you can do provides some of the most unique and interesting forms of fun out there. On that note, using the grappling hook and parachute to climb will never get old. Using the parachute after grappling and then letting the ‘chute go and re-grappling, rinse and repeat, gives Rico a great deal of mobility, and it’s always fun to chase down a fleeing scientist by skipping three flights of stairs in this way.

Unfortunately, some of the keys cannot be rebound, and cause a bit of distress, especially if you’re like me – one of the rare few who uses QWES instead of WASD to move about. The horn (Q) and picking up weapons (E) are two instances of keys which cannot be rebound, which can become very annoying.

Again on the refreshing side of things, Just Cause 2 is through and through a sandbox game done in arcade style. There are very few sequences which are purely scripted, and the chaos you cause is purely in the hands of you and your imagination. If you want to ride two motorcycles at once by stunt jumping rapidly between them, you can do it. If you want to tether a bike to another car using your grappling hook and slingshot it off the side of a cliff, you can do it. A lot of this game’s fun lies with the variety and openness, and with the fact that it does not impede your ability to do as you please.

Avalanche boasted, prior to Just Cause 2’s release, that the game could provide 150 hours of gameplay. I completed the main storyline missions, and 29% of the game overall, in the span of 21 hours, and gained 44% of the Steam achievements in that time. I might be able to ‘complete’ the game in less than 150 hours, but I can totally see 150 hours of gameplay just on the merits of this game’s fun as being plausible, ignoring completion.

As a whole, Just Cause 2 is chaotic and refreshing. It is largely the type of game that allows you to just sit back and do as you please, enjoying every moment of it. It’s a blast. However, there is a very apparent Achilles’ heel that needs to be made clear. As fun as Just Cause 2 can be, there is a right way to play it if you’re looking to maximize your enjoyment, which is by sticking with the sandbox elements and not the structured storyline missions.