Unfortunately, I was unable to find a single multiplayer match and therefore cannot comment on the game’s multiplayer. This will be a review of the single player only. If I can manage to find enough matches to inform my opinion on the multiplayer I will post my impressions at a later date.

What initially caught my attention about InMomentum was its similarity to Mirror’s Edge. Both games revolve around a fundamental free running motif, and both games feature very bright and sanitary looking art styles. After having played the game, this comparison holds up in only the most shallow of ways. Read on to find out why.

Where the two games differ greatly is in their physics and levels of simplicity. Where Mirror’s Edge aimed for realistic parkour, InMomentum basks in the abstract and is better off for it. Truth be told, the feel of the game is much more closely equated to a cross between the physics of Quake and the minimalism and freedom of motion present in Aaaaa! A Reckless Disregard for Gravity. It’s for this reason that InMomentum is able to convey a sense of speed without constantly breaking the flow of jumping from geometric platform to platform.

As far as actual mechanics go, InMomentum is brilliant in its simplicity. Instead of overwhelming the player with a ton of tools each with one rigid function, Digital Arrow has settled on a few very flexible tools which fit with the minimalist nature of the game. The right mouse button causes you to jump, left mouse allows you to jump off of walls, and the space bar shoots a projectile used on switches to remove colored barriers. Initially, the colored barriers feel like flow breaking obstacles, but they, like all other obstructions, can be vaulted off of with the wall jump.

Additionally, the longer you spend without interrupting your momentum the faster you go and the farther you can jump. You can even receive a massive speed boost by facing the ground and firing your projectile while jumping just like rocket jumping in Quake. This opens up the possibility for some jaw dropping speed runs and splendid stunt work.

All paths are always open, but as you improve you’ll stop seeing pieces of the level as fractured obstacles and start seeing them as shortcuts waiting to be conquered. Thanks to some ingenious work on the difficulty scaling, players shouldn’t ever find themselves overly challenged or breezing through the game. As you scale the difficulty higher your double jumps become less effective forcing you to think faster, hone your reflexes, and become more resourceful. Despite its simplicity, this is a deceptively challenging game, but because of the soothing digitized soundtrack, pleasant aesthetic, and fast paced fun, it isn’t a demanding one. You’re free to craft your own experience, whether that be a relaxing escape or an intense sprint through a speed run course. 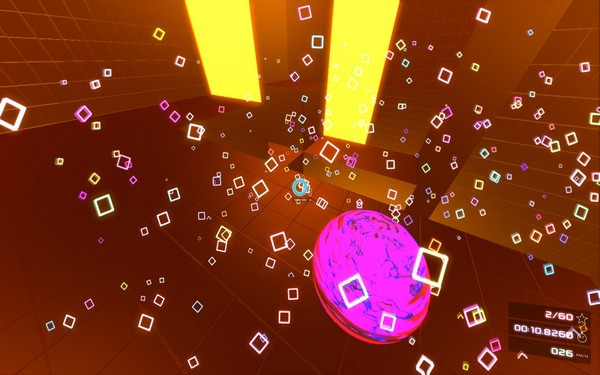 Offering only two modes, sphere hunt and time trial, which are based on collection and speed running respectively, and a decent handful of maps along with multiplayer, I had some reservations about how substantial an offering InMomentum would be. This might sound foolish for a $10 indie game, but it’s a concern nonetheless. I might not ever reach 100 hours played, but this is certainly a more filling meal than it is a light snack despite what it looks like on the plate. Each time I sat down to play I found myself utterly absorbed for hours at a time with no sense of time passing around me. With the game being easy to pick up and enjoy immediately and its high skill ceiling, neither casual players nor dedicated speed runners looking to gain mastery over this game will be left out in the cold.

Enthusiasts will get far more mileage here than your average player, but when is that not true? One of the hooks that grips me the most is how simple the game is, and yet how much there is to master. Plodding along, bounding over impossible geometry, and basking in the sense of speed was fun, but the first time I realized I was getting better was truly an exhilarating thing, and then realizing how I could put that skill increase to use was even more so. This is a game that generously dispenses some of the most fulfilling moments of gameplay in any indie game, and even rivals many triple A offerings.

Yet InMomentum is not without its drawbacks. While it’s a joy to look, the simple solid colored platforms caused me some disorientation at times while scaling vertical walls, the HUD’s glow impaired my vision of what it was trying to display, the tutorial was unnecessarily long winded for the information it had to convey, there was some inconsistency with getting changed key bindings to stick, and having jump and wall jump as two different buttons is a bit unintuitive. These issues are rarely major headaches, and when they do frustrate they do so only briefly. I also had issues getting Steam achievements to unlock, but that’s hardly even a noteworthy issue.

Like Mirror’s Edge, the hook of the game is in its open environments and free running which InMomentum pulls off with far more grace. Even while learning it’s possible to maintain a pleasant sense of flow which never came naturally to Mirror’s Edge, and the game’s skill curve is steep and satisfying. You can glide along happily as a newbie, but you will fluidly bound through levels as a master in one of the most satisfying balancing acts of skill and payoff in videogames.

InMomentum is without a doubt worth the price of admission, even without the multiplayer component factored in. It is a game which lives moment by exciting moment. It represents the freedom to do and not the restriction of following. This game is about the mastery of simple mechanics which yield delightful results and the freedom to engineer your will with the thrill of speed and exhilaration layered on top.

Where other games ask you to follow along, InMomentum smiles and invites you to lead the way.