Hopping into the cockpit of a limitlessly customizable giant mech equipped with a veritable arsenal should never, under any circumstance, be anything less than gleeful. It’s a wonder, then, that From’s latest entry in the storied Armored Core franchise manages to siphon the fun right out of what should be a mix of strategic mech-building and bombastic gameplay.

Before we even get to that though, it should be noted that the game is entirely multiplayer-oriented. From the word “go,” players connect to the game’s persistent world and join a team. If not for the fact the servers have demonstrated a level of stability suitable to psychiatric wards, this component of the game would shine. 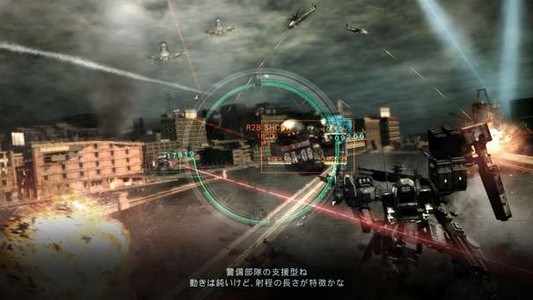 From Software has a propensity for innovation in its multiplayer systems, and Armored Core V is no exception. The game is essentially an integrated online experience in which players can easily join up with teammates to tackle the story missions in co-op or capture another team’s territory. As I said earlier, the world is a persistent one divided up into 9 regions. Teams can compete directly against one another, or attack locales that are abandoned. Once territory is captured, that team is able to fortify it with gun batteries. All successful missions will contribute to an overall team level which, as your team progresses in rank, unlocks more parts for purchase in the game’s shop and opens up new challenges. Alternatively, a player can hire lone mercenaries to aid them, or become a mercenary himself to earn a nice cash bonus for helping others out. All of this would be great if not for the fact that, even if you would prefer to enjoy the game on your own, you have to connect to the unstable servers. I was forced to do the 3rd mission of the game 6 times over because the server kept disconnecting my partner which also dropped me out of the mission. Other times I was kicked back to the main menu where I had to wait another 40 seconds to get back online just to repeat the ordeal all over again.

Mission three would have still been an ungodly frustrating experience even if the servers weren’t an issue. The mission climaxes with a fight against a moving train; a fast moving train, mind you. This train was divided up into about 10 parts with each part being damage resistant and having an enormous health pool. On top of that, I was using a mech with below average speed which made it impossible to catch up with the train. This forced me to loop backwards around the track several times doing minor amounts of damage to the boss each time. It is an inexcusably drawn-out fight that is just one of many mind-boggling issues present in the story mode. 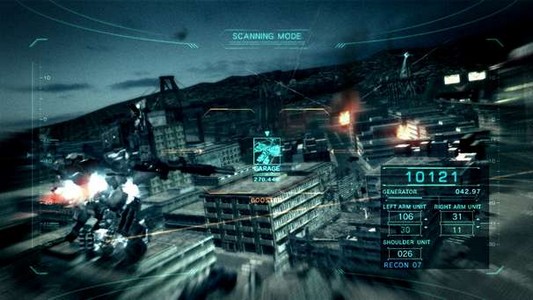 The story itself is no less irredeemable. It would merely be unremarkable if not for the fact that, in addition to being so emaciated, it is also rote. An evil corporation, sinisterly monikered ‘The Corporation,’ rules a dystopian future with an iron fist and you, a member of a scrappy resistance group, have to fight back! The game would have actually benefitted from just dropping you into a bombed out city with no context.

Much of what is wrong with the story, the color-by-numbers mission progression, and the poorly thought-out encounters could almost be forgiven if the game was actually fun to play. Each trigger button is assigned an arm and each arm can be equipped with a weapon ranging from a sword, a gatling gun, rockets, etc. You can also install backup weapons for each arm as a contingency, and even the mech’s shoulders have their own fitted armaments. It’s using these bounties of destruction that is the problem. Weapons lock on to enemies on-screen automatically, and enemy projectiles, likewise, home in on you. At close range the field of view, visual distortion when hit, and clunky controls impair one’s ability to employ finesse during a fight. At medium range the lock-on mechanics turn the game into a simple matter of mashing the triggers. The long range combat is just a matter of taking shots at immobile targets. The game also adds devastating one-time use “ultimate weapons” to the mix. 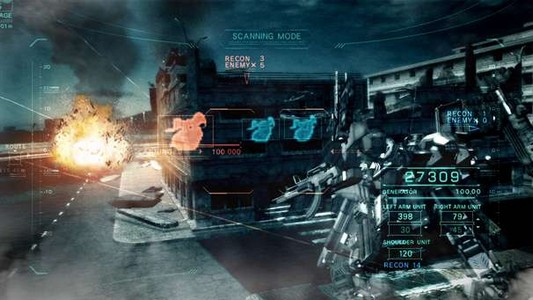 Maneuverability within the mech is limited, but not necessarily for the obvious reasons. While it’s understandable that a giant mech would be cumbersome, there are mobility problems that don’t follow any sort of internal logic. For instance, the game allows you to scale buildings and build momentum by sort of wall jumping while the mech’s booster-rocket is active (and I can see no reason why it wouldn’t be because it does not drain energy over time). Many buildings seem to have invisible ledges that just stop you from ascending further, sometimes a quarter of the way up. Other times your mech will just fly off in a random direction for no discernable reason.

Many of the gameplay problems that this game faces are further exacerbated by the visuals. That is a statement I never expected to have to type, but there you go. The textures of the game are merely ugly, but the chugging framerate and various filters are what actively interfere with the game itself. In an attempt to give the world a grimy and edgy dystopian aesthetic, From’s art department clearly lost the ability to restrain themselves. For starters, Armored Core 5 features particle effects which flicker across the screen constantly. This effect resembles rain animated in a flip book. The world is muddy, dark, and enemies blend in with their surroundings, or they are obscured by other particle effects. Worst of all is the obnoxious visual distortion that occurs every time the player is hit. It isn’t useful visual feedback – it is as good as blinding the player. 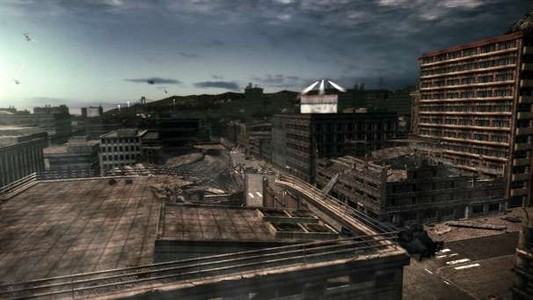 One of the only redeeming points of the whole experience is the enthralling breadth of customization that can go into mech building. It speaks volumes about this game that one of the only enjoyable aspects of it takes place in the menus outside of the actual missions.

Armored Core V is insufficient as a sim, poor as a mech-based shooter, grotesque, and an all-together miserable unfulfilling experience. A passable game with some fresh concepts is buried somewhere in this clunky, sputtering, visual horror, but I could sooner dig my way to China than find it.