Kinect Star Wars is a mess. That much is established immediately in the campaign. Despite being what is essentially an on-rails game, you are required to awkwardly hold one foot out to maneuver in battle. It isn’t quite as awkward as the control scheme found in Rise of Nightmares, but it doesn’t exactly enhance the experience either.

Controls are unresponsive and allow you to progress with the most lethargic of gestures. The light sabers choppily jerk around and they lag behind your motion significantly. The “1:1” responsiveness makes the likes of Medieval Moves on the PS3 or Skyward Sword on the Wii look impeccable.

Just as your light saber feels far out of sync with your hand motions, not all of the animations line up properly either. There was one section where I was dragging the saber through the hull of a droid and the orange line marking the path of the incision appeared several inches to the right of the saber. In fact, animations often don’t play at all. Most notably, this happened to me several times during jumping sequences where I would jump and my character would freeze for a moment and then warp forward. Other times enemy models would shake as though they were seizing and then just disappear instead of playing their death animations.

To break up the monotony of mindlessly flailing your arms and sometimes leaning left to right, the game gives  you short prompts that you have to comply with to avoid hazards. The prompt is thrown onto the middle of the screen and demonstrated by a slightly opaque Obi-wan. The problem is that he is so large that he obscures your vision of your character, and he is just transparent enough that your character partially obstructs your vision of him demonstrating the motion you need to perform. This is especially frustrating when it happens during the speeder sections when seeing obstacles becomes important.

Speaking of the speeder sections, it’s a testament to just how unpleasant this game is that not only did I not enjoy it, it also caused me physical pain aside from all the arm flailing. That’s because the speeder bike sections require you to hold your arms out in-front of you like a zombie for long periods of time.

The game employs a one-on-one dueling system which is featured several times throughout the campaign, and it even has its own mode. The problem is that it is obtuse and that it suffers from a lack of precision present in the rest of the game’s combat. You defend and attack in phases. In the first phase you cannot attack. Instead, you block a series of painfully telegraphed attacks until you fill a meter, then you and your opponent clash light sabers. At this point, you have to throw your arms out in front of you to push them back. A pulse of light strobes back and forth from one end of your saber to the other, and I thought that was an indicator of when I had to push my opponent back, but it never mattered when I actually did the gesture. Next, the opponent opens up so you can attack until your attack timer depletes. At this point the game would fade to black and cut at seemingly random times for what I thought was going to be a scripted finishing move, but it would just immediately cut back to the duel and continue for a couple of sequences until I could finally end it. How you manage to make light saber duels mundane and confusing is beyond me. 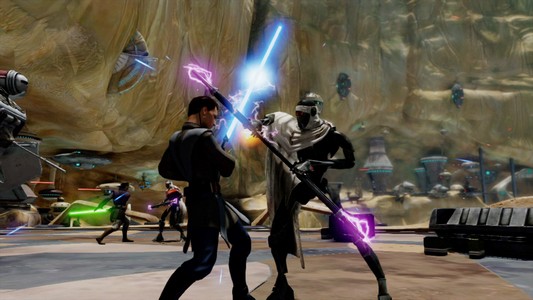 A good on-rails game makes up for robbing the player of free movement by making them care about the obstacles in their pre-determined path; by providing interesting enemies and gimmicks; by keeping you engaged in the trip without letting up on the pacing. A bad on-rails game drags you forward while your listless gaze drifts elsewhere. It allows you to progress with the least effort possible, showing you the least interesting things possible, and only snapping you out of a bored stupor long enough for you to mindlessly complete a combat checkpoint on the road to being done with the game. Kinect Star Wars is the latter. It is as though the game feels that it is above having to entertain – as if just being  dropped into this world should be enough to satisfy. It is not.

Some of the blame needs to be put on the input device, though that does not absolve the developers for creating this broken mess. The only truly good Kinect-exclusive has been Dance Central. Microsoft insists that the tech is compatible with unique and meaty triple-A experiences, and continuously trots pathetic floundering guppies on deck to suffocate and die in shame. With each Rise of Nightmares and Kinect Star Wars that gets released, it becomes harder to believe that the Kinect is capable of working well with things other than vapid mini-game collections and fitness titles. 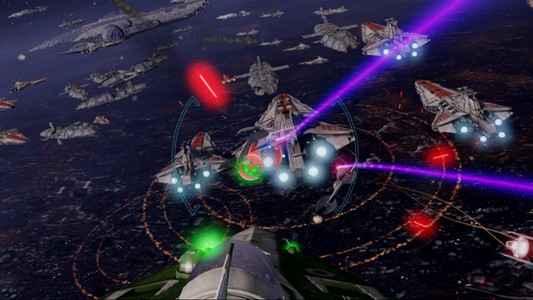 If the evolutionary function, the underlying point of motion control, is to deepen immersion with intuitive controls, developers should not screw that up by creating a complex and unwieldy labyrinth of gestures that serve only to create a barrier between physical action and on-screen response, and they should also not be keen to jump on board with motion control if the responsiveness of the controls is going to hinder their ability to create something engaging. Light saber duels and using force powers is practically what made the idea of motion controls appealing. It is incomprehensible how those ideas could have been so poorly realized.

It is insulting to me, as a consumer and as a critic, that I am told that this isn’t the upper limitation on what experiences the tech can provide when all evidence points to the contrary. A new piece of tech such as this should usher in the most creativity. If the tech is actually capable of going anywhere, minds should be ablaze with wonderful and fresh ideas on how to utilize it to make new and better artistic expressions and triple-A games. Instead we’re getting shoddily crafted rubbish like this; generic mini-game collections and half-hearted on rail flail-em-ups. Those things can be fun, if done well, but we need more than that. Furthermore, barely anything we’ve seen so far HAS been well done. We are inundated with legless drivel. I would not criticize this game or this tech so harshly if I did not care. If I didn’t care I would happily call it shit and be done with it, but I want something better, especially if the game has potential, and especially if the tech has potential. 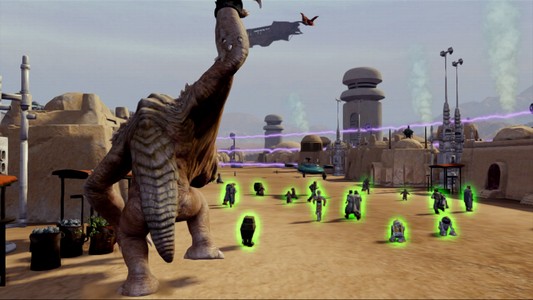 Now that that related aside is off of my chest: also featured in the game are the to-be-expected assortment of mini-game modes. One has you flailing around and creating mayhem as you play as a rancor. The most maligned addition to the game, however, is the dancing game which attempts to take a bite out of Dance Central‘s apple. Featuring an assortment of pop parodies, such as Ain’t No Hologram Girl, the inclusion of this mode is cringe-worthy and puzzling. For any other game, this would have been an eye-rolling April Fool’s joke. In Kinect Star Wars, it is the highlight.

Kinect Star Wars does one thing exceptionally well – it manages to make the prequel trilogy look like a masterpiece. After all, the Phantom (Menace) of the opera isn’t so ugly when you sit him down next to the elephant man.

Being a Star Wars licensed product doesn’t mean much these days, and yet what little meaning remains is squandered here. Kinect Star Wars is a listless embarrassment to the license, to the Kinect, and to video games. No. This game isn’t raping anybody’s childhood,  just like The Phantom Menace didn’t. Those happy memories are, thankfully, eternal. Sad memories of this game, on the other hand, will quickly fade into oblivion.