Much has changed since Max Payne’s last outing. Nine years have passed. In that time Remedy moved on to hit Alan Wake out of the park and, in their absence, Rockstar Vancouver stepped up to the plate to develop Max Payne 3.

Even more has changed within the game. Max has abandoned his bleak, snowy, noir setting and hung up his trench coat. The trappings that typify the series, though, have remained familiar.

James McCaffrey reprises his role as the titular main character; an early sign that, for all the change the series undergoes with this third entry, enough remains the same that it is still decidedly Max Payne. McCaffrey continues to bring the character to life with the aid of a sharp script and characteristic voiced inner-monologues recited in the form of morose and flowery-yet-gritty noir prose.

Max himself continues on a downward spiral fueled by self-loathing. He is not, nor has he ever been, the idealized action genre hero; a ripped Adonis figure with snappy retorts who never fails to save the day. Never is this more true than in the game’s third installment. Max is a disheveled pill-popping alcoholic who is trying to find absolution at the bottom of a glass, or at least he’s trying to forget the ghosts of familial tragedy that have haunted him for quite some time. He is also, physically, the opposite of the ideal action hero – a fat and balding middle-aged man.

While the dialogue and characterization are sterling, I was less fond of the main plot. Even so, it wraps up nicely and is definitely above average. It revolves around the kidnapped daughter of Max’s new client in Sao Paulo. What follows that event is the unraveling of a conspiracy perpetrated by a paramilitary group and set into motion by some powerful political forces. That conspiracy is rather interesting, but too little is revealed until much later in the game where reveals are packed in like canned sardines. The pacing feels off. The reveals also rely heavily on the presence of a character so knowledgeable that his presence feels closer to deus ex machina  than to something organic. Still, all things considered, the good outweighs the bad in this story, and if it’s main sin is not living up to the bar set by the characterization, it’s still doing something right.

Characterization and script is where Max Payne sets itself apart from the crowd, but its action is still top-notch and its core shooting and cover mechanics are crisp. Snapping in and out of cover is seamless and responsive, and never overly sticky. The camera is perfect resulting in less time spent frustratedly fidgeting with the view beyond cover. Bullet time is, of course, featured prominently, and the game sports enough slow motion goodness to make Zack Snyder blush.

What is most impressive about the game’s abundance of scripted slow motion sequences (along with its reliance on slow motion as an on-going general combat mechanic) is that it never gets old. Its use is well paced enough that it never becomes repetitious and is always used in a suitably thrilling context. One particular section that made a lasting impression took place in the brightly lit lobby of my client’s building just as a group of enemies rode a jeep through the glass front-doors. I was tasked with slo-mo diving out of the jeep’s path while taking out the driver and passenger, and then continuing on by picking off reinforcements behind the vehicle.

Enemies, instead of absorbing bullets like lead-soaking sponges, fall quickly. They can also dish pain out just as well as Max can. This fact, combined with a lack of regenerating health and the aggressive AI that will fearlessly encroach upon your position or flank you, should you choose to turtle behind cover, forces the player to manage the bullet time meter and the limited stock of healing pain-killers. Even on the 2nd lowest difficulty setting, Max Payne 3 can provide a suitable challenge. It is outright brutal on the hardest setting. 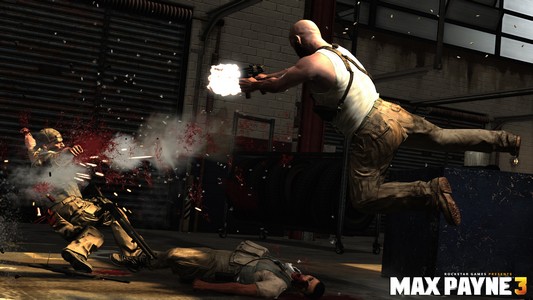 Another surprise that Max Payne 3 offers is the beautiful scenery and diverse environments. While its peers are wallowing in dreary muddy browns and grays to establish a bleak tone, Max Payne finds more interesting ways to set the tone without sacrificing a vivid color palette, gorgeous environments, and scenes full of detail. Even the cutscenes are visually alive, sporting a cinematic style that resembles a cross between Splinter Cell Conviction, Kane & Lynch 2, and 24.

This beauty is accentuated by the dramatic soundtrack which is as aurally arresting as it is mournful and melancholy, headlined by the series’ signature cello theme.

Despite the environments being so richly detailed, the level design is rather linear, though it is far more open for exploration compared to Kane & Lynch 2, and not nearly as filled with straight-forward corridors as Final Fantasy XIII. Still, the level design often strangles the opportunity for tactical flanks.

The newly introduced multiplayer mode shares the problem of sabotaging the player’s tactical movements across the (much more open) maps. In this case, gigantic icons over the heads of distant enemies and friends betrays the player’s position. In addition, damage dealt and received is just as high in multiplayer. That, in combination with the very fast respawn, makes multiplayer a rapid-speed sequence of kill, die, respawn that is, at times, disorienting. I also found the lobby timer to be far too long. It was usually quicker to exit out of a freshly ended match and search for a new one than to wait for the timer to count down again.

Gripes aside, the online slow motion was not something I expected to succeed, but Rockstar managed to implement it perfectly. With its trademark mechanics, an extra dose of tension brought about by the pacing, and expected suite of multiplayer unlockables, it is fun, but it feels less methodical which gives an air of being disconnected from the rest of the franchise.

It’s true that Max Payne 3 ditches the snowy streets of New York for sunnier pastures in Brazil, but its exploration of Sao Paulo’s criminal underworld retains every ounce of noir influence. While it has moved on in many ways, it hasn’t forgotten how to tell a brooding tale about a non-traditional action protagonist, and it certainly hasn’t forgotten how to do adrenaline-pumping fun.