Hearthstone can be an extremely random game. To that you might say, “Well, obviously. It’s a card game. All card games are inherently random.” While it’s true that all card games have an inherent element of randomness, Hearthstone has quite a bit more.

What all card games have in common is shuffling your deck and drawing cards from the top. You can rarely ever be certain what you’re going to draw next, and you might not always get you want or need. However, this can be mitigated by deck construction. By building your deck with duplicates of cards, for instance, you increase the possibility of drawing at least one of those duplicates at a reasonable point in the game. If you can have 30 cards in a deck, by including just one duplicate you go from a 1/30 chance of drawing a specific card, to 1 in 15. Furthermore, by adding card draw mechanics to your deck you increase the rate at which you cycle through it in search of what you need. You can also aim for redundancy, including multiple cards that solve the same problems you’re likely to run into, and many card games allow you to throw back you’re opening hand and draw again for a chance at a better opening. One can mitigate the randomness inherent in drawing from a shuffled deck.

But Hearthstone doesn’t just feature this one element of randomness shared among all card card games. Hearthstone builds unpredictable outcomes into the card mechanics themselves. Yogg-Saron, for instance, features text that reads: “Battlecry: Cast a random spell for each spell you’ve cast this game, targets are chosen randomly.” In other words, if you have cast 5 spells all game, and then play Yogg-Saron, he will pick 5 random spells from the entire pool of spells in the game and cast them with completely unpredictable targets: Enemy minions, your minions, the enemy hero, your hero, or even Yogg-Saron itself.

Keywords which exhibit random effects are present in the game like ‘Discover‘ which presents you with 3 randomized options and allows you to pick one, and your opponent has no knowledge of what options were presented to you or what you chose. Adapt is a recently added keyword that presents you with 3 randomized options out of a pool of 9 in total, and allows you to pick one to apply as a buff to a minion.

Reddit user IAmNotOnRedditAtWork crunched the numbers for each set of cards and found that the pool of HS cards is becoming more random over time. Out of the 372 cards that Hearthstone launched with, only 29, or 7.8% of them, featured a random effect.

As of the most recently released expansion, 32.6% of ‘Journey to Un’goro’s’ cards had a random element, and with the injection of 135 new cards into the overall pool of cards, Hearthstone’s total percentage of cards with random effects is now just over 20%. One fifth of all Hearthstone cards do something random.

Hearthstone’s use of randomness has been controversial. Debates about the inclusion of this type of variability crop up often on forums, and a number of highly ranked streamers and pros have lambasted design decisions which focus on RNG, and have even stopped playing the game over it.

So why is Hearthstone so random?

In a Fireside chat during Blizzcon a few years back, Blizzard clarified that they don’t see randomness and skill as mutually exclusive, and in fact they include randomness in Hearthstone partially because the ability to navigate the novel situations that random effects produce leads to more on-the-fly decision making. They think the number of unique and unpredictable situations that can occur due to random effects makes the game more interesting.

It can also add a sense of drama and provide swings in momentum that make comebacks slightly more likely, according to Blizzard.

Finally, randomness exists in Hearthstone to aid less experienced or skilled players. It lets a weaker opponent pick up an occasional win over a more skilled opponent, but hopefully doesn’t mean that they can beat a more skilled opponent consistently. The same is true of poker. A novice might be able to fluke his way to beating an ace poker player on one hand, but over the course of many hands the pro is going to come out ahead.

That should be the goal anyway. Too much variance and the game may as well be a coin flip, but the ladder statistics and stats on tournament performances don’t support that being the case. Top Hearthstone players are capable of achieving a degree of consistency, especially over non-pro players. There’s an argument to be made that the degree of consistency is still too low for a competitive game, but that’s an entirely separate tangential topic. For now, I want to end by focusing on how randomness is mitigated along with which random cards serve as examples of “good” design and which swing too close to being about flipping a coin. 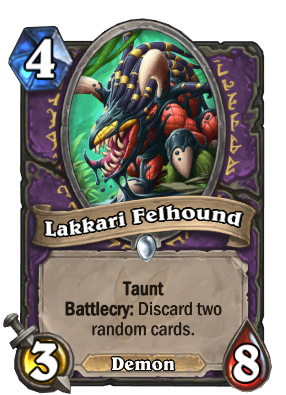 I mentioned earlier that Warlocks have a class identity and deck archetype centered around discarding random cards from your hand. Usually the trade-off for losing a random card is a minion which is over-statted for its mana cost, like the Lakkari Felhound. Others have powerful card text in addition to high stats like the Doomguard.

With the release of ‘One Night in Karazhan’, Blizzard looked toward allowing players to construct decks which further mitigated the harmful drawbacks of the discard mechanic: Malchezaar’s Imp – A 1/3 demon for 1 mana which causes you to draw a card every time you discard one, so you are never left starving for things to play. Additionally, they added the Silverware Golem, a 3/3 minion costing 3 mana which, when discarded, is instead put on the field.

This created the “discard zoo” deck archetype. It made a set of cards with a very random drawback consistent enough to play and do well with.

This is an example of smoothing out randomness. Another is by designing cards with a random effect that don’t have a huge amount of variance in their possible outcomes. Lightning Storm is an area of effect spell that deals 2-3 damage to each enemy minion it hits. That’s a very low amount of outcomes, and you can plan around that small number of variables presented. Another keyword, ‘Adapt’ works because you have 3 options to choose from out of a possible 9. If you are trying to solve a specific problem, there are likely at least 2 traits in the pool of 9 that can benefit you, so you have a statistically higher likelihood of rolling something decent. For example, if you need a minion to be sticky, +3 health, divine shield, and stealth are all decent options. There’s clearly going to be an optimal solution, but the degree of variance doesn’t swing between abysmal and game changing. Instead, it usually swings between good and ideal. That is a more acceptable range of variability.

On the other hand, the ‘Discover’ mechanic leaves the opposing player with no information and there are too many possibilities in the discovery pool to possibly formulate any kind of strategy that can hope to account for all potential outcomes. In essence, there’s no opportunity for counter play or strategic maneuvering with the ‘Discover,’ keyword.

Hearthstone is going to continue to be random. ‘Knights of the Frozen Throne,’ the newly unveiled Hearthstone expansion, has had all of its cards revealed and there are plenty of random effects to be found in its massive set of new cards. What we can only hope for, and what we should be telling Blizzard, is to be thoughtful about what type of randomness they include, because some types are far more frustrating to encounter than others.