Earlier this month I panned Kinect: Star Wars, and I had some harsh words to say about the Kinect as well. Sony’s more traditional attempt at motion control is just as deserving of criticism. Though the Kinect, and to a lesser extent the Wii, both hold the promise of untapped potential and unique advantages, Move’s advantage over the Kinect lies with its more corporeal ‘wand’ form and buttons, and also tends to feel more fluid and accurate than the Wii remote. Yet both of these advantages have been rendered moot for the same reason that the Wii had a reputation for sheltering a glut of shovelware, and for the same reason that Kinect is currently coping with the same stigma. It lacks a killer app.

Sorcery, announced at E3 2010, promised to end the drought of good Move games. How well it has succeeded at doing so is debatable. 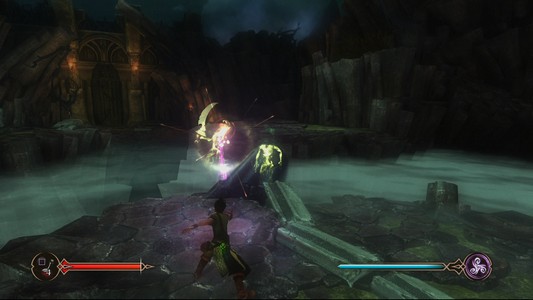 For all of its similarities to the dreadful Medieval Moves, Sorcery proves to be something of an older-brother figure to the game, bearing a passing resemblance to its sibling, but also informed by the wisdom that comes with age. Sorcery‘s protagonist, Finn, is clearly older and far less timid, though he is headstrong and bumbling to the point of being one-note. The art style errs more towards photo-realism than did Medieval Moves, and it features environments that are both richer in variety and detail. It is unassailably good looking, though that fact is undermined by the generic setting. Its soundtrack is whimsical. It’s story, while also generic, does not feel as truncated.

More importantly, Sorcery evolves the gameplay. It’s true that one game revolves around sword play, and the other revolves around shooting magical bolts, but the comparison here is that while Medieval Moves didn’t change much from the moment you first gained control over Edmund, Sorcery does. Sorcery repeats Medieval Moves‘ most egregious sin by utilizing the same two enemy types from the beginning of the game until the very end, but it finds some interesting ways to vary things up. 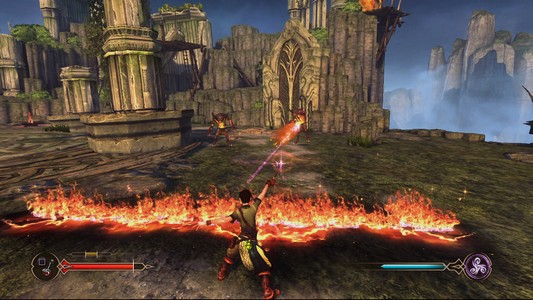 For instance, you start out with an arcane bolt that you simply hurl around haphazardly. It isn’t long until you, utilizing full freedom of motion, are positioning yourself so that you can hurl those arcane bolts through pits of fire to ignite them and immolate distant enemies. After that, the game drip feeds you a variety of elemental powers ranging from fire to wind. The game reaches its peak when it has you combining these elements together to create a flaming whirlwind through which you must fire off flaming arcane bolts to light several braziers at once, or some similar task. Though the game relies on you to be competent and aim in an enemies general direction, a generous amount of auto-aim is thankfully applied to each cast.

The downside is that there aren’t enough interesting ways to combine your spells, nor is there a sufficient number of puzzles requiring you to discover fun ways to combine them. Casting spells is deceptively rigorous in that the goal is to replicate a small number of gestures rather than free-style with waving the wand about. The controls themselves are also a bit spotty. Flicking the motion controller in a certain direction effects which spell you cast and its trajectory. Flicking your wrist to the left while arcane bolt is equipped curves the bolt left around enemy cover, while doing the same motion with the wind element equipped creates a small tornado. Motions involving jerking the controller upwards to hit high-ground enemies frequently proved to be unresponsive. Often times I would try to cast an arcane bolt with this motion and nothing would come out. The element selection also involves gestures, some of which were equally unresponsive. 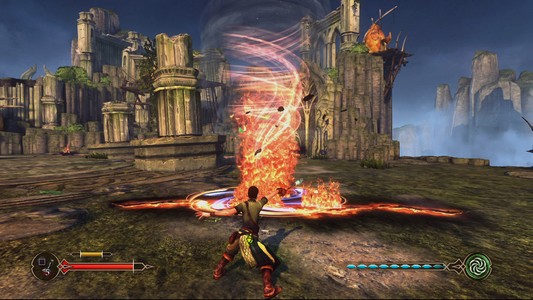 Another intriguing distraction lies with the game’s alchemy system. Pots full of things to sell, ingredients, and coins are littered about the levels. Coins can be used to buy other ingredients. These ingredients can be combined to research dozens of potions that run the gamut from enhancing spell damage to augmenting Finn’s health or mana pool. They also come bundled with a tedious mini-game that involves using gestures to combine the reagents and stir them in a cauldron before drinking the newly brewed potion.

Since the player doesn’t have access to a 2nd analogue stick to control the view, the camera works in a similar way to that of Skyward Sword where you simply rotate Finn and center the camera with a button press  on the navigation controller. This works well enough most of the time as the game requires absolutely no platforming. It is not without its issues though. 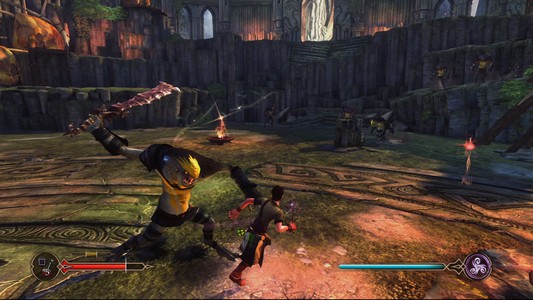 Due to the use of automatic enemy lock-on, the player isn’t even given the option of fighting a bad camera angle in a hectic fight. This isn’t so bad when the game is only throwing a few of the same type of enemies at you, or placing them all directly in front of you, but as the game goes on combat becomes increasingly saturated with combatants, many of whom will happily take any chance to flank Finn. Robbing the player of agency over the camera would not be such an issue if it did not prefer to focus on harmless enemies in the distance while others are sticking their swords in Finn’s back.

The whole affair isn’t terribly long, and I dare say it’s actually well paced. Had it gone on any longer it would not only have dragged, but the apparent flaws would threaten to outweigh the fun. Like most of the bosses, the final boss fight is rather enjoyable. My only criticism of it is that while other boss fights demand that you master the spells that you have learned up to that point, the grand finale against the Nightmare Queen falls a bit short of the promised climax by not testing the abilities you’ve honed throughout the rest of the game. 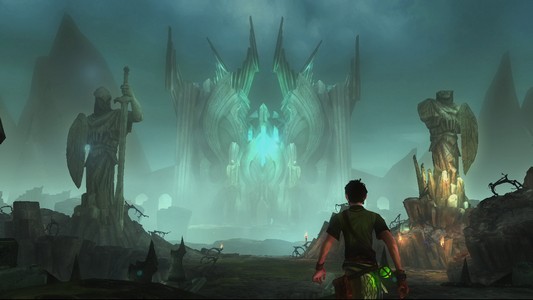 The Move’s most anticipated title up until now has proven to be a mixed bag. On one hand, it is genuinely fresh fun centered on a peripheral that really needed it. On the other hand, it fails to live up to the expectations heaped upon it largely due to a lack of enemy variety, a generic world and narrative, and an increasingly cumbersome camera.
Still, none of these flaws ruined the fun completely, and only one of them proved difficult to ignore. It’s a trick that is enjoyable the first time, even if pulling the curtains back saps that joy a bit. It’s also a trick that can’t be repeated again and still impress. If Sorcery 2 is going to exist, it will need to not only fix what is broken, but change things up in a bag way. For now, though, let’s take Sorcery as a sign that the Move is coming out of its growing pains.
7.0 / 10